Thank you to all those who attended and sang in "A Choir's Christmas". Following on the heels of Angel Share and A Magical Christmas in Chelsea, it was a wonderful way to settle into the feeling of the upcoming holiday season.


We begin our 2015 singing on January 12th, and do hope that you will consider joining us! Registration is now open for both children's choirs, and for some voice parts in The Morel Singers. For more information, please get in touch with our Musical Director, Stephanie Sewell info@chelseayouthchoir.ca or 819.827.2408 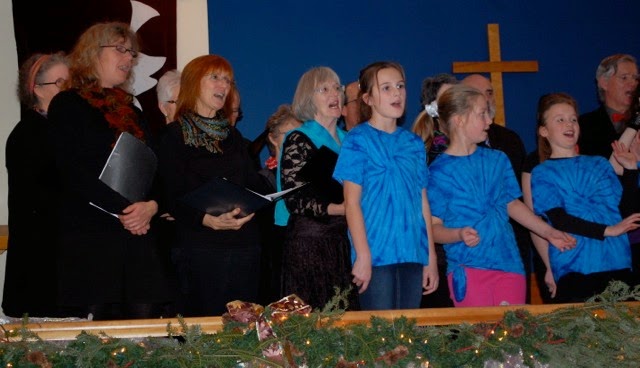 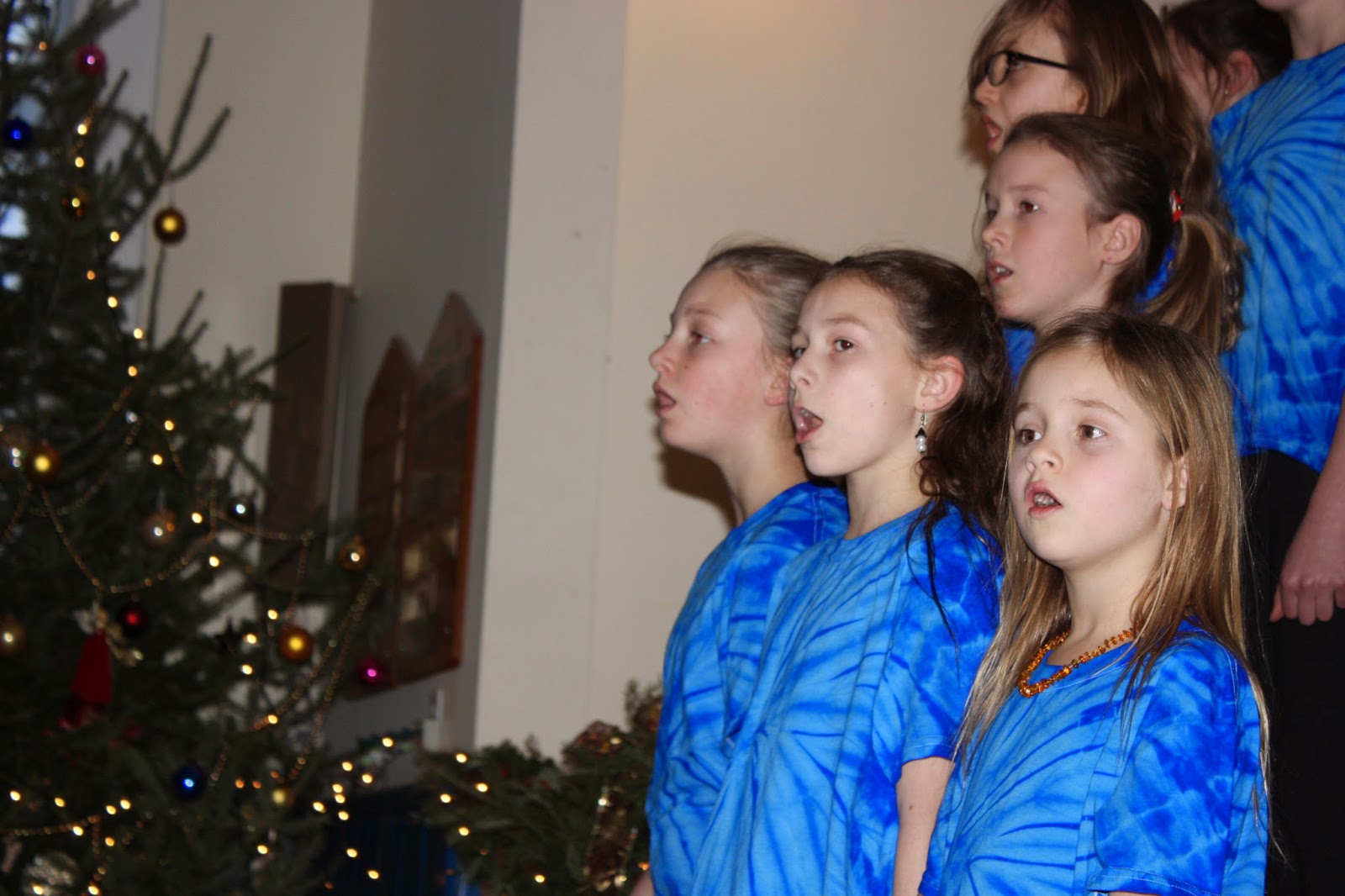 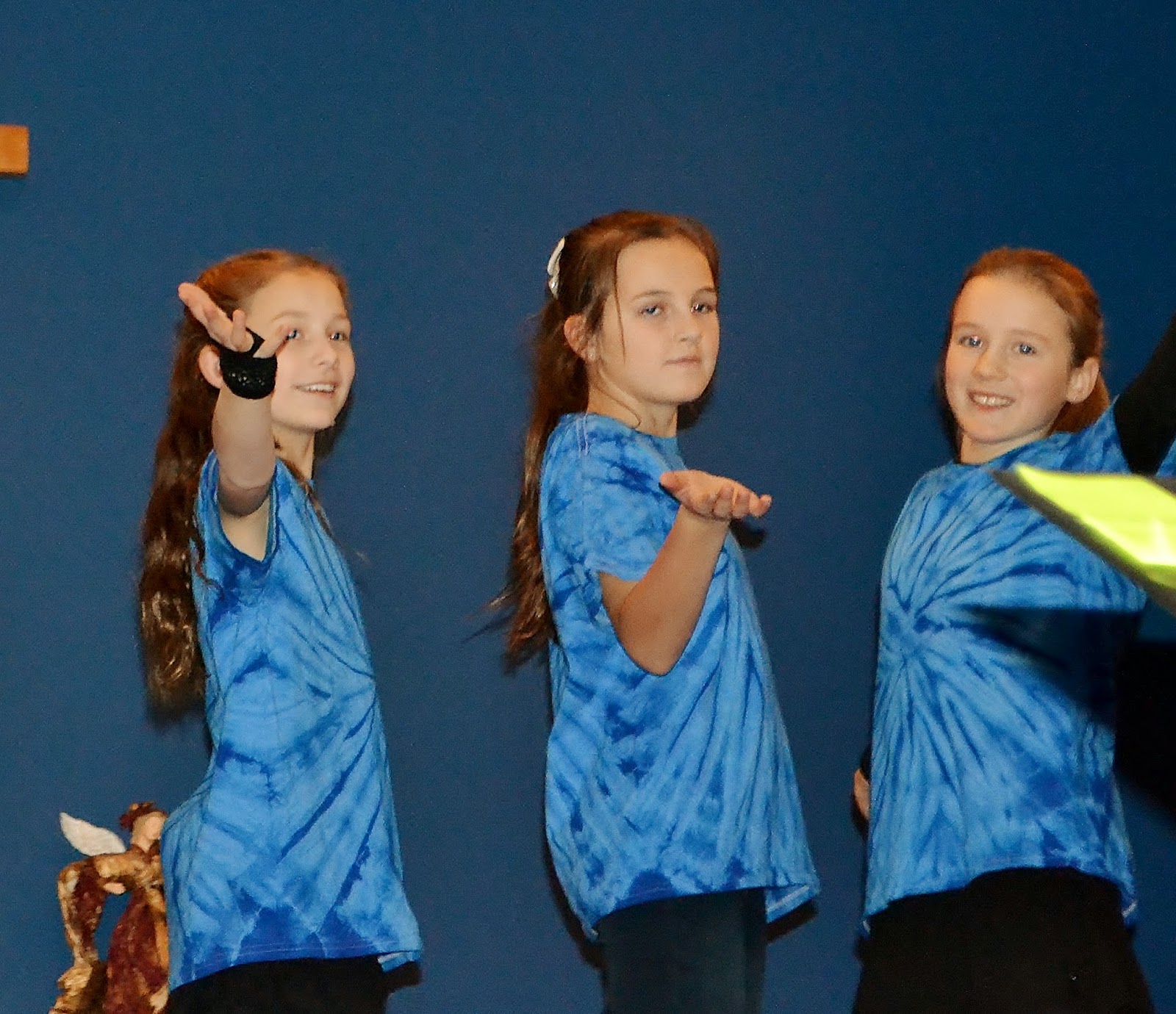 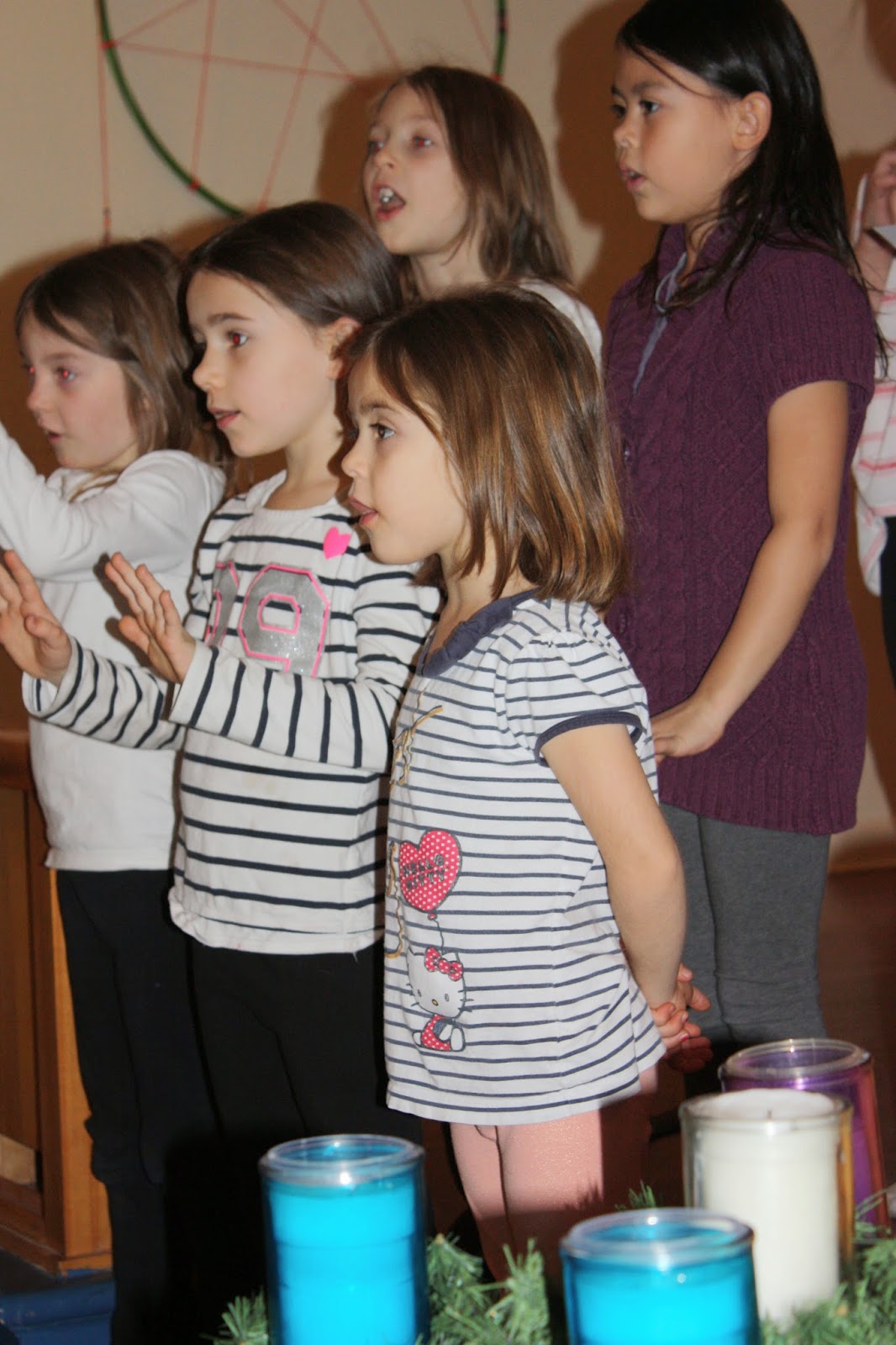 practising for the concert! 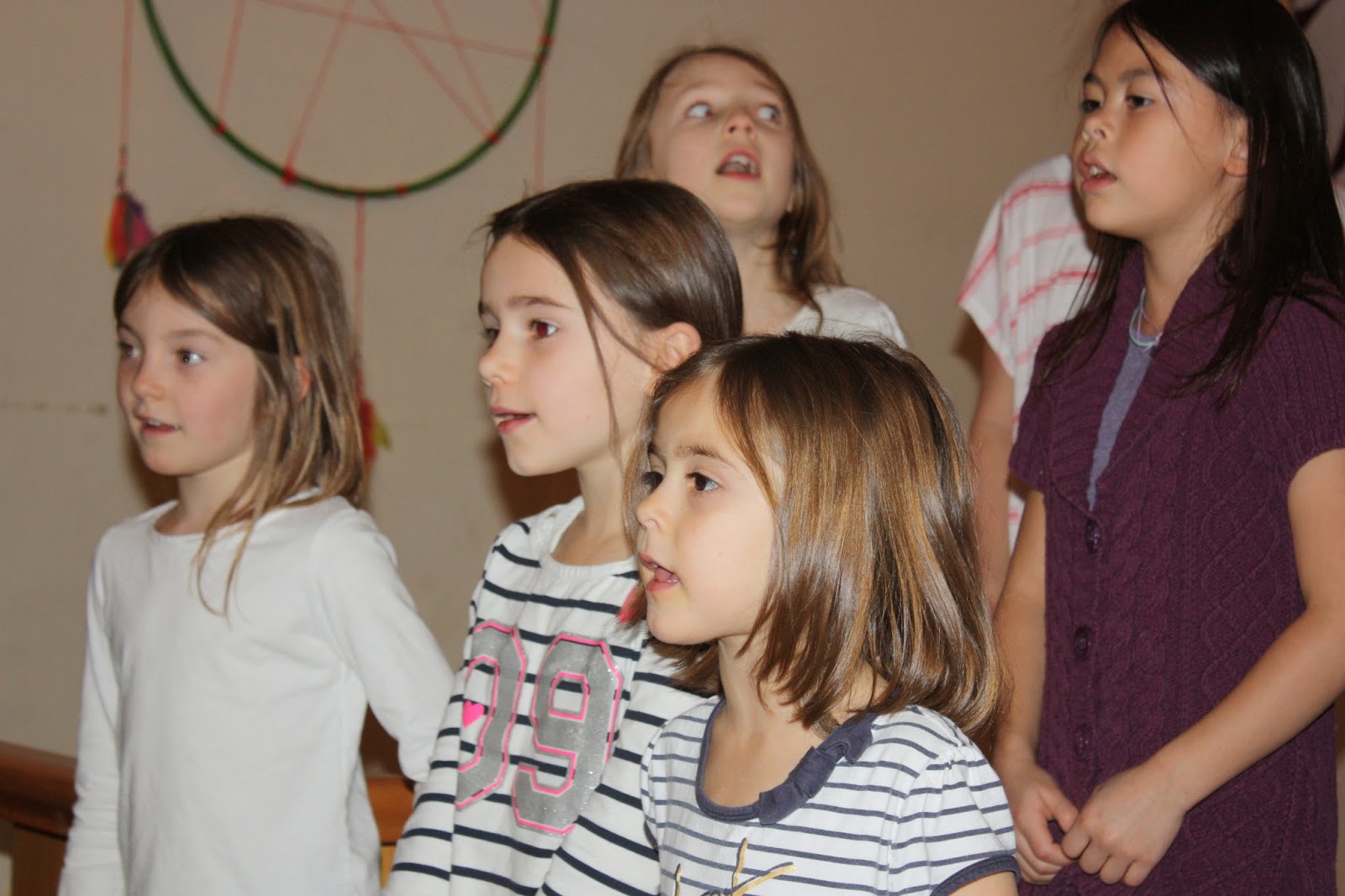 We are enjoying preparing for three performances over the next few weeks, and hope to that you will join us to celebrate the season with song.

First up is:
el’s Share
the fundraising concert that Ian Tamblyn hosts with his many musical friends every year. This year, the el’s Share is marking its 10th anniversary with the addition of a matinee show. We hope that you will join us there at 3pm: we look forward to joining Ian and the other musicians in singing some songs for you, and to singing more songs WITH you! Tickets are available at Bougie Doozy Candles, Les Fougeres and Une Boulangerie dans un Village, all in .

A Magical Christmas in Chelsea
to welcome Santa Claus to ! We will be singing at La Fab, right next door to St Stephen’s Church, from 5 until 5:30. At 5:30, Santa will light the Christmas Lights on the tree outside La Fab. All are welcome to join in this community gathering and to have a few moments with Santa Claus!

The following day, Sunday December 14th at 3pm the Junior and Senior choirs of the CYC, and our adult and teen counterpart, The Morel Singers, present our joint concert:

“A Choir’s Christmas”
We hope that you will join us at the Mill Road Community Space () for this very special musical gathering of our community. As always, the CYC and The Morel Singers invite you to share their love of joyful singing by singing along with us on some of our numbers. 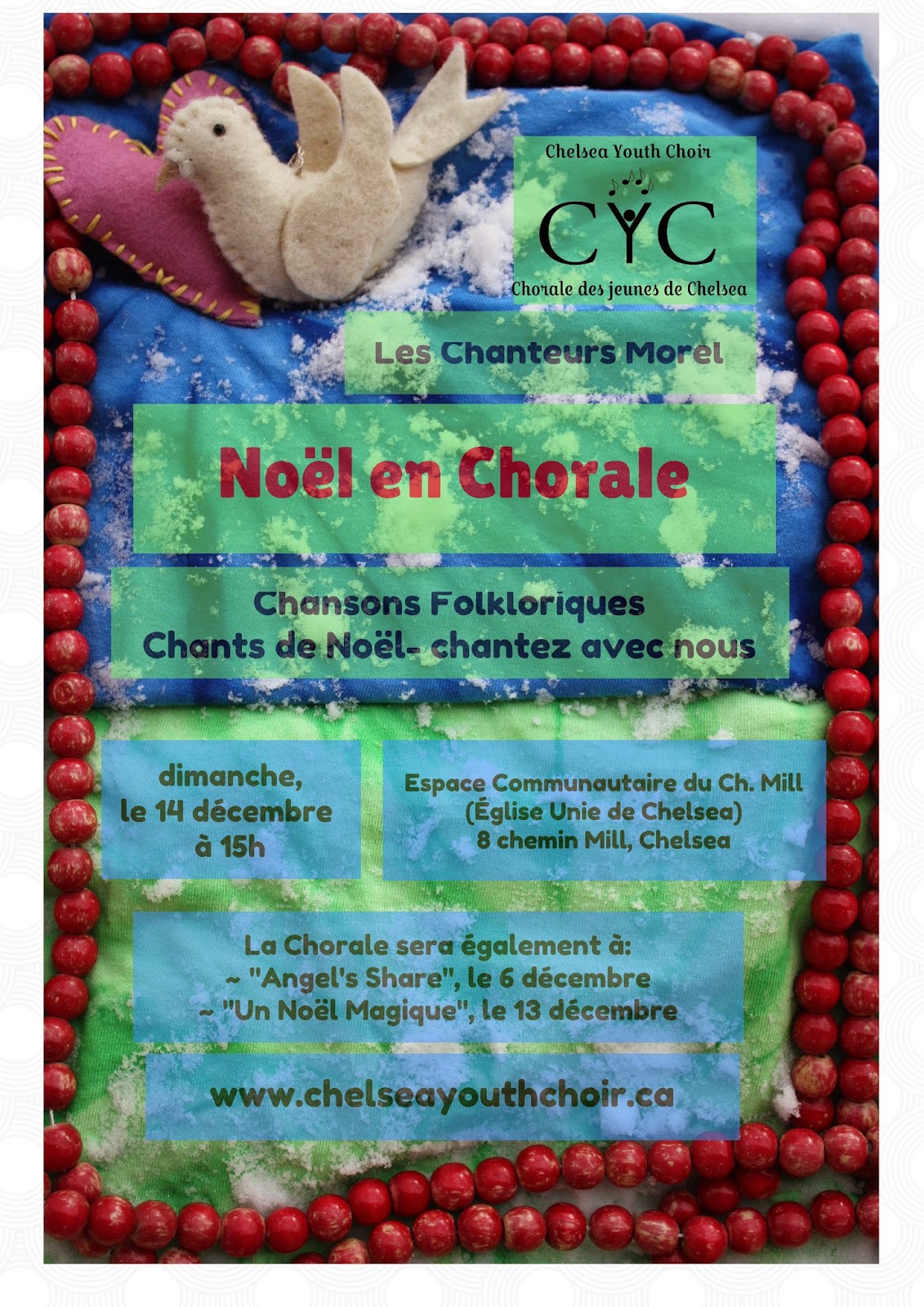 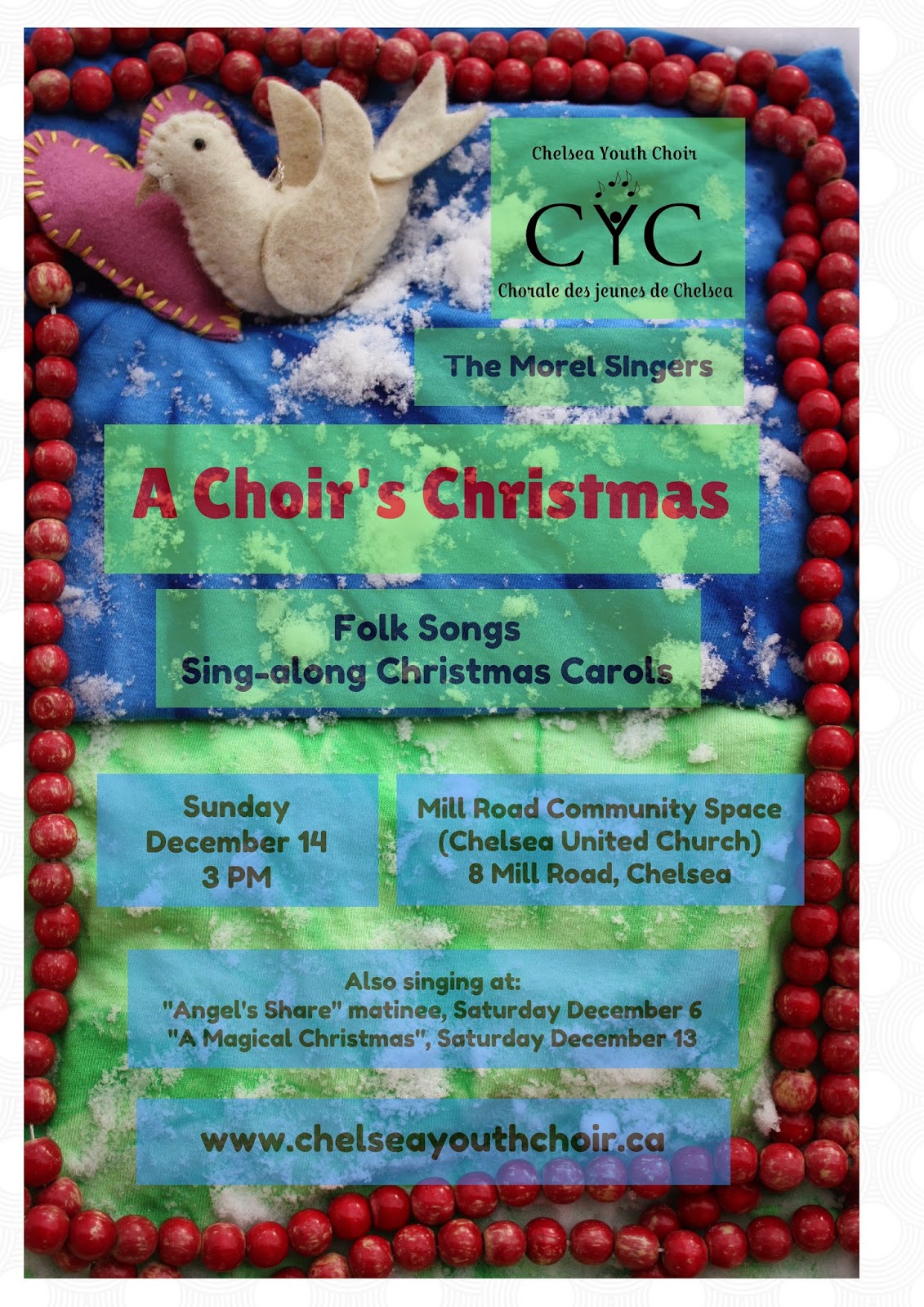 Looking forward to singing with you over the next few weeks,

Stephanie
For the Chelsea Youth Choir and The Morel Singers

LET'S SING TOGETHER! Our new season is just about to begin, and I'm looking forward to making music with returning and new members.

We're going to delve into folk songs this year - from here, there and everywhere. Here's a little preview of this year's repertoire:

A few of the songs each choir will sing:

The Junior Choir, which learns its music by rote, is going to be singing "My Paddle's Keen and Bright" paired with "Land of the Silver Birch". We'll also be learning a version of "Tis a Gift to be Simple" which can be harmonized with an original melody based on the word, "Alleluia". And many more!

The Senior Choir, which learns some of its music by rote and some with scores, is going to be singing the Hebrew song, "Zum Gali Gali", a really fun arrangement of "Old Dan Tucker" and "Cape St. Mary's", a folksong from Newfoundland. And many more!

The Morel Singers, who learn songs both by rote and from the music score, is going to sing "California Dreamin' (just for fun!) and "Swing Low Sweet Chariot". We're also going to continue with "Shto Mi e Milo", the Macedonian song that we enjoyed so much last year, as well as learning another Macedonian song to join it. And many more!

One of the aspects of the Chelsea Youth Choir and Morel Singers community that I love the most is that the choirs join together to sing. It is incredible to see multi-ages, and especially multi-generations coming together in song. A few of the songs that we'll be singing together over the year are: Les Anges dans Nos Campagnes, Rhythms of One World, and Si njay.

We are looking forward to several workshops, one with Kathy Armstrong from Baobab Drummers, and a second with Jean Marc Lalonde, a superb Franco Ontarian musician. These workshops offer a great opportunity for the choirs to sing and learn together, as do the shared songs that we prepare for each concert.

Please get in touch if you'd like to join us! stephanie@chelseayouthchoir.ca

End of the season

The Chelsea Youth Choir and Morel Singers are on break for the summer. We will be starting our new year in early September. Check back in July for more details!

If you would like to enquire about joining either CYC or The Morel Singers, please contact our Musical Director, Stephanie Sewell: stephanie@chelseayouthchoir.ca or 819.827-2408.

The CYC is just beginning its new season, and is pleased to welcome new singers into all of its choirs.
The Junior Choir is for children in grades 1-3 and the Senior Choir is for those in grades 4 and up. The new “Morel Singers” is for older youth and adults. (The Morel Singers will start their rehearsals in mid-February.)
Please note that singers are welcome to try the choir for up to three rehearsals with no commitment.

Thank you for all you did in the choir.You are the best choir director ever.
(from one of our senior choir singers...)
Thank you for all your hard work, Stephanie! Several people commented on your magnificent patience, and I wholeheartedly agree. You have a really wonderful way with the kids and they are lucky to have you.
Wonderful concert gathering! Lots of feeling and joy and song in the room!
Did I ever tell you that I was brought to tears the first time I attended a CYC concert in May 2014? It was just so extremely moving how you conveyed a sense of community, how the kids were so completely involved, with each one (or almost each one, anyway) taking a turn to announce a song. I’d never before seen such an inclusive, happy, feel-good event and I’m thrilled that my daughter is getting to benefit from that environment. Keep up the excellent work!
CONGRATULATIONS!!!
Wow, we were both so moved, thrilled and impressed by today's experience. You did such a great job with the kids, and we're so blessed to be part of CYC.
Thank you for the beautiful message to the children- they will be really excited to read that tomorrow and a huge thank you to you for another wonderful choir experience for us all! I didn't see you after the concert but wanted to congratulate you on the fabulous performance- the best Mother's Day gift for sure. You truly have the magic touch and infinite patience with the kids.